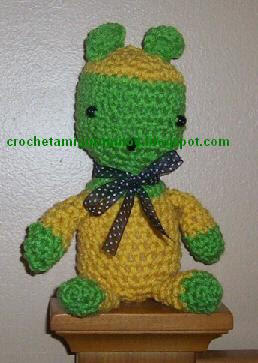 Make this cute little guy to add to your collection of stuffed toys or to give as a gift.

materials: crochet hook size 4.00, worsted yarn (Main Color for body, Contrasting Color for details),
fiberfill stuffing, stitch marker (I use a small bobby pin)
2 beads for eyes and one for mouth (optional, you can use yarn instead to embroider eyes and mouth), small amount of ribbon for bow if desired, yarn needle for sewing

finished size: about 8" tall, not including legs


do not join rounds, use a stitch marker and move after each round is complete.


assembly:
with yarn needle sew ears to top of head, side by side, near rnds 3 and 4
sew arms to body near rnds 19 and 20
sew legs near rnds 28-29 of lower body
sew tail to lower back of body
for face:
sew 2 beads on front of face and one bead just underneath for a nose.
dont sew the eyes too close together.
or embroider 2 eyes and a nose on front of face with yarn
take a ribbon and form a bow around Wilburs neck
TİME 5:32 AM